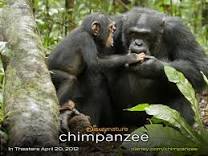 On Earth day April 22, 2012 Disney released the nature documentary entitled Chimpanzee.  The film follows a young common chimpanzee named Oscar who finds himself alone in the African forests when his mother is killed.  Oscar is in his toddler years when he is orphaned.  He is a part of a close-knit tribe of Chimpanzees, but no other female chimpanzee can afford to take him into her fold.  Oscar is too young to care for himself and he attempts to find a spot in each of the other family units within his tribe.  After being rejected by all possible care takers he approaches the leader of the tribe named Freddie.   The pair slowly begins to warm up to each other and eventually Freddie allows Oscar to ride on his back, something only mother chimps do.  It is a moving documentary that took over four years to film.  The film gives evidence to the fact that adoption can take place even within a tribe of Chimpanzees and a family can emerge in many different non-traditional formats.

We were designed to care for each other.

Adoption is the decision to love, but really isn’t this the case with all love?  It is a choice and not a feeling.  Freddie decided to care for a chimp which was not a relation to him.  He chose to take care of him and teach him how to survive on his own.  He nurtured him and carried him.

What was the gain to Freddie?

It is the great mystery of the documentary.  Freddie’s surprising choice cannot be measured or evaluated.  It can most certainly be felt by all those who watch the relationship form on camera.  But there is no scientific explanation for it.

If chimpanzees can choose to care for each other, then can’t we at the very least learn from their example?