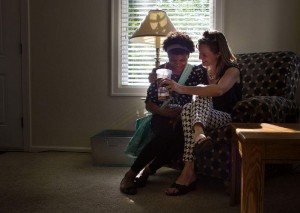 By Mark Baker The Register- Guard

Think about the state taking you away from your troubled mother when you’re just 7 years old.

Think about bouncing from one foster home to the next before finally being placed in one for three years while awaiting an adoption over which you have no control.

And then think about how, one day, you meet a woman from Oregon, who’s been “matched” with you through a foster child adoption service in that faraway state, and who says she wants to take you home with her — forever.

Think about all of that and decide for yourself whether Loreanne might be the bravest 11-year-old girl you’d ever want to meet.

Because Lori, as she is known to all who know and love her, is not only living here in Eugene now with her new mom, Jen Bell; she is thriving.

She saw her first major college football game last weekend when the Oregon Ducks lassoed the Wyoming Cowboys at Autzen Stadium. And she started the sixth grade at Roosevelt Middle School on Sept. 3.

“It’s green,” Lori says when asked what she thinks of Eugene. One of the first things she told Bell about her new home? “There are a lot of hippies here.” And that was on Coburg Road. And how was the Lane County Fair? “It was fun,” Lori says. Did you win something? “An elephant.” A stuffed elephant? “No, a real one,” she says sarcastically. Her new mom shoots her a look only a mother could give.

“She’s a great kid. I’m so lucky to have such a smart kid who’s so active,” Bell said earlier this month, watching Lori run and play in the yard of their new home in southeast Eugene, a house just south of the University of Oregon campus that she has rented so that Lori can attend Roosevelt while she tries to sell her home in the River Road area. 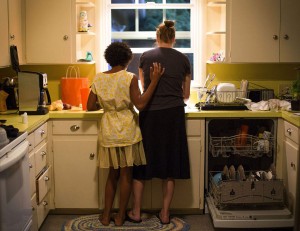 Not that anyone said this was going to be easy. After all, how does a 43-year-old woman who’s never been a mother get to know and understand a young girl from Texas who’s never really known much stability at all since coming into this world in December 2002?

Frustrated one day during the summer, Bell said she called Lori’s last foster mother in El Paso and said, “Help! What did you do when she absolutely won’t do anything?”

Lori worries about Bell getting a boyfriend because things didn’t turn out so well when her biological mother got a boyfriend.

There were other struggles early on, after Lori arrived in Eugene on May 19.

“You picked me, I didn’t pick you!” Lori said one day after refusing to empty out the dishwasher.

And Lori flinched a couple of times when Bell got angry, as if she were going to be hit, as if she had been hit before.

“She actually thought I could do that,” Bell said back in early August, on a sticky hot Sunday afternoon on the back patio of the River Road-area house.

“You’re doing this for the money, aren’t you?” Lori said on another day.

But $400 a month from the state of Texas does not go too far, said Bell, who co-owns her own business, Eugene’s bell+funk marketing agency, with partner David Funk.

No, she’s doing it simply because she wants to be a mother.

“I knew that I wanted to be a mom,” Bell said back in early August, tears welling in her eyes. “I’ve known since … teens, maybe. And it wasn’t happening the old-fashioned way, so …”

Initially, Lori didn’t call her “Mom” or “Mother” or anything at all. “She avoided it,” Bell said.

But it didn’t take long. Now Lori indeed calls her Mom or Mother, and sometimes it just sounds like a playful “Mudder.”

“I want to move to California,” Lori says. Why? “I don’t know,” she says. “This actually just came up in the last 24 hours,” Bell says. “Is it because of Todrick Hall?” she asks Lori. Hall, a 29-year-old former “American Idol” contestant, is an actor and singer who’s perhaps Lori’s most favorite person in the whole world. “The girls love him,” Bell says. “He’s gay. He’s a little young for me and a little gay for me. But he’s a good-looking man. He did a song called “Twerking in the Rain.” Lori playfully screams, “Stop it, Mother!” Bell glows with pride.

Before Bell came along to give her what will hopefully be a permanent home (there is a six-month grace period before the adoption can be finalized), Lori was one of almost 400,000 foster children in the United States living without a permanent family, according to the Congressional Coalition on Adoption Institute, a Washington, D.C.-based nonprofit agency “that works to raise awareness about the needs of children without families and to remove policy barriers that hinder children from knowing the love and support a family provides.”

About 101,000 of those foster children are eligible for adoption, but 32 percent of them will wait more than three years in foster care before being adopted, according to the institute.

In 2012, more than 23,000 foster kids in the U.S. turned 18 and aged out of the system without being adopted, which substantially increases their chances of becoming homeless, unemployed, convicted of crime or abusing drugs and alcohol, according to the institute.

Bell was matched with Lori through A Family For Every Child, the Eugene nonprofit organization that seeks permanent, adoptive homes for foster children.

Bell said she considered adopting a child from overseas, but found that most countries are not eager to have children adopted by a single mother. She also looked into domestic adoptions in the United States but found that most of those are parents seeking adoptions for their newborns. “And the more I thought about it, I didn’t really want a baby,” because she works full time running her business, Bell said.

She was familiar with A Family For Every Child, because she is friends with the organization’s founder and executive director, Christy Obie-Barrett, and is also familiar with its Heart Gallery, displays around the community of portraits of adoptable children.

When Bell heard about a workshop being offered by the organization in November 2012, she decided to attend.

Clients pay a one-time “home-study fee” of $1,000 and are assigned an adoption caseworker who makes a report on a prospective parent’s strengths and weaknesses, Obie-Barrett said.

A Family For Every Child was formerly only licensed to match prospective parents with Oregon foster children, said Obie-Barrett, who with husband Bill Barrett has 12 children, nine of them adopted. But the organization began working with other states a couple of years ago, which is why Bell was able to be matched with Lori.

Clients can see all the children available for adoption on A Family For Every Child’s website and can make submissions on those children they would considering adopting.

Bell “submitted” last year on eight to 10 girls, including Lori, from across the nation. She got a message back on a girl in Washington state saying that child had already been matched with a family. Then Bell found out she was one of three finalists to adopt Lori.

On Nov. 25, three days before Thanksgiving, Bell and her mother, Penny Bell of Whidbey Island, Wash., flew to El Paso to meet Lori and Placencia, her most recent foster mother, and Lori’s Texas caseworker.

They went out for ice cream.

“I hugged her way too quickly,” Bell recalled. “She freaked out.”

Four months later, Lori came to Oregon for the first time, during spring break, to visit Bell for 10 days. They spent part of that time at the beach, which was not only Lori’s first visit to the Oregon Coast, it was her first visit to any coast.

They also went to the Oregon Coast Aquarium in Newport and attended “Science Day” at the UO.

They are standing back-to-back on the front lawn, their hands slowly interlocking as Bell talks to a reporter. Now she’s slowing trying to lift Lori onto her back, but Lori is strong enough to pull in the other direction and lift Bell on to her back. Now Lori has her up and is carrying her across the yard. Bell is laughing and screaming for her to put her down, but Lori continues on like a sherpa carrying a load up Mount Everest, smiling all the way.

Lori finished the fifth grade at River Road/El Camino del Rio Elementary School after arriving in May. But Bell, a 1989 graduate of Pleasant Hill High School and a 1994 graduate of the UO’s School of Journalism and Communication, wanted Lori to attend Roosevelt. “Lori is very creative, and she loves painting and theater and dancing and singing, so I think Roosevelt is a good fit,” Bell said.

On the first day of school, Bell posted on her Facebook page a photo of a smiling Lori in a blue plaid shirt with white scarf, her afro plucked high. It got more than 100 “likes.”

“She’s beautiful!” friend Heather Harris wrote. “So very happy to see your dream come true! I’m sure you are an amazing momma.”

“Will you be my mama?? (wink) you’re freaking rad!” friend Carrie Russo posted. “Looks like the two of you make an awesome team.”

Said Obie-Barrett of Bell: “She’s courageous, and I think she’s perfect for this role. I give her a lot of credit. I’m totally impressed with her.”