Posted on September 3, 2014April 3, 2019 by
adoptionfamilyopportunitiesresources 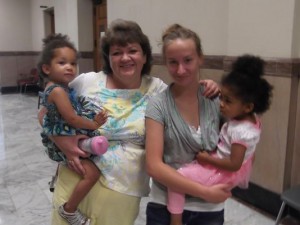 By: Marisa Kwiatkowski, The Indianapolis Star

Mary Beth Bonaventura, director of the Indiana Department of Child Services, said about 1,800 additional families will receive such payments retroactive to July 1, the start of the state’s fiscal year. The payments are meant to provide financial support to families that adopt foster children with more extensive needs.

Gov. Mike Pence on Tuesday authorized DCS to pay subsidies to every family on its wait list and every family that adopts a special-needs foster child in the current fiscal year, at a cost of about $10 million, Bonaventura said.

“I’m excited,” she said. “This is a great day for children and families that adopt them.”

Indiana hasn’t paid state adoption subsidies to any new families since 2009, when the burden for funding the program shifted from counties to the state. Indiana was the only state in the country to place families on a wait list rather than paying subsidies, Josh Kroll, project coordinator for the Adoption Subsidy Resource Center for the North American Council on Adoptable Children, said in a court affidavit.

That situation is the target of a lawsuit filed in June by La Porte resident Debra Moss, who claims DCS failed to pay promised subsidies while returning roughly $240 million to state coffers since 2009.

DCS argued in a recent court filing that it hadn’t had the money to make such payments. On Tuesday, Bonaventura said Pence instructed her agency to pay the subsidies using money it otherwise would have to revert to the state’s general fund.

She said she couldn’t say why that wasn’t done under the prior administration, but she said the roughly $4 million that DCS returned to the state in the past fiscal year would not have been enough to fund the program.

Lynn Toops, of Cohen & Malad, the law firm representing Moss, said the timing of the announcement was telling.

“It is no coincidence that once we filed a lawsuit to force the state to keep its promises in their contracts, the state announces it will start paying to help these kids,” Toops said in a written statement. “We could not be prouder for causing the state to do what’s right.”

Toops said Indiana still needs to pay retroactive subsidies to the families that have been waiting since 2009.

“The state broke its promise to these kids, and it needs to pay them — the sooner the better,” she said.

Pence said in a news release that a study committee is looking at ways to address the needs of Hoosier families and “effectively promote adoption.”

“Although the state adoption subsidy is only a small piece of the assistance the state of Indiana offers to adoptive parents, it is my belief that funding the program this fiscal year is the right thing to do,” he said in a prepared statement.

Rushville resident Deborah Schlechtweg said she is thrilled that foster families, including hers, will begin receiving adoption subsidies. She adopted twin girls in 2013.

Schlechtweg, 46, said she had been worried about how she would afford her daughters’ needs as they get older. Both girls, now 3, were born with cocaine and heroin in their systems, Schlechtweg said.

“I love my girls,” she said. “It means they can have more. It’s been a long time coming, and I’m glad for everybody.”