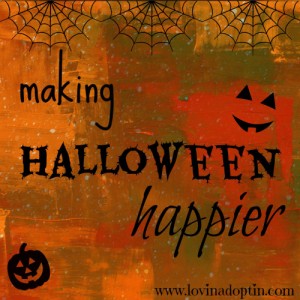 How do we stay sane during Halloween? It can be hard, even with kids who don’t have sensory issues, or attachment issues. The first goal is to make it fun for your child. For children with attachment issues, I don’t agree with the approach of removing everything fun in their life. If there’s no fun, there are no opportunities to grow as a family, nor do they feel they will ever get to do anything, so why try to be good? Let them do something for Halloween, and I don’t just mean attending a school party. 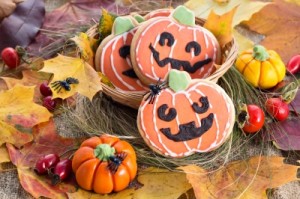 A major component of Halloween is costumes, and they can be a catastrophe. Mom has expectations of what her child will wear, how cute it will be. She puts the costume on her adorable daughter, and daughter promptly removes it saying, “I hate the wig, it itches.” I’m not veering too far off our last costume trial. There are still some of us who still live in LaLa Land where cute children wear adorable outfits, where we spend too much money and are disappointed when our child doesn’t want to wear what we planned.

This doesn’t mean we come up with a new ensemble, no. But it does remind me that Halloween is for my child to get some candy and hopefully have fun. Battling the costume makes it fairly miserable for everyone.

Bright lights, cold weather, hot costumes, screaming, laughing kids, blaring music, skeletons that make sudden movements, scratchy, itchy outfits. It’s a lot for a typical person, but add sensitivities and it can be an irritating, maddening conglomeration. So don’t fight the costume. If this is the first time you’ve become aware of sensory issues and notice them in your child (you can read more about them HERE), then go ahead and buy a different costume with comfort in mind.

We have a friend whose son has Aspergers, and he wore a sheet (ghost) for a couple years (he’s seven, so you know he’s not a teen who just wants easy so he can bag some candy). By the end of the evening last Halloween, the ghost was a ghost no more, the sheet was off. Wearing anything was irritating to him, and even the sheet was too much by the end of the day. His parents opted for a good time rather than a battle. They recognized his sensitivities and went with it.

Our son who has Autism has some of those same sensitivities. Last year he loved Cat in the Hat, in fact one of the few words he said was, “Go, go, go…” from the show Cat in the Hat on PBS. At the last minute we ran to the shop and purchased costumes, and they had THE Cat! Perfect. He also had an obsession with hats at the time, so we thought this costume was a dunk in the tank. Well, he wore the hat for two houses, and it was off. It’s okay, we were lucky he wasn’t tearing off the remainder of the outfit while he traversed the streets in his wagon.

The wagon… while trick-or-treating, the adults on the other side of the door asked several times if he wanted candy, and they looked at him with a forlorn expression, feeling bad that our poor child was stuck in a wagon while his sister (who is the same size) walked to each door and collected her stash. What those people didn’t know: Jeremiah had no idea what we were doing, he would’ve fought going to each door (because he didn’t know what we were doing), he didn’t eat candy (not the kind they were handing out anyway), and he was comfortable in his safe wagon. That last point is most important. If we are going to let Payton have a good time trick-or-treating, then Jeremiah should be kept comfortable, and he was.

During trick-or-treating, or any event that includes walking farther than one-hundred feet, our son, Jeremiah, rides in that wagon or a stroller. (That doesn’t mean he’s inactive, on the contrary he’s VERY busy, but this is for his sanity, as well as ours.) This year his wagon will go as Lightening McQueen from the movie Cars, and he will be “driving.” He loves the movie Cars and any of the little Cars vehicles that have eyeballs attached. Even though he may not notice what he’s riding in, we know we did our best to give him what he likes and what’s most agreeable to him.

Don’t let costumes add to your battles, there are enough. Make an effort to have fun, and know that it may not work out, but if it does, that would be awesome, wouldn’t it? Have a Happy Halloween.