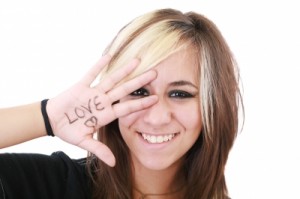 Sara is an almost 21 year old who came into foster care when she was ten years old due to her mother’s death from alcoholism. An older brother was unable to care for her because of her high needs. Her father was unknown. She is currently living in an adult foster home as she is developmentally delayed and needs supervision and aid with daily tasks.

Sara’s caseworker referred her for Family Finding as she was about to ‘age out’ of Department of Human Services care and she wanted Sara to be reconnected with supportive family. After making calls, the Family Finding volunteer located and connected with Sara’s older brother James. Due to the possibility of Sara being adopted, contact with James had been halted years ago. Sara ended up not being adopted and had been living in permanent foster care. James told the Family Finder that he thought of Sara constantly over the years but didn’t know how to find her.

James shared the names of extended family members and explained that he was married with two young boys of his own. He provided current photos of himself and his family, as well as photos of Sara as a child to the caseworker.

Sara was graduating from her school program and starting work at a local community college’s recycling center. The caseworker explained the Family Finding program and about the search for her family members. Sara learned through Family Finding her brother James had been located. She paused and repeated his names a couple of times before shouting “Jimmy?! You found Jimmy?!” She jumped up and down crying and talked about how much she loved him and how sad she was when she was told they couldn’t see each other anymore because she was going to be adopted. She was worried that James was going to be upset that she was adopted, not realizing that the adoption was never finalized.

When Sara was shown the photos of herself as a baby, she stared at each picture for several minutes, entranced and absorbing the details, pointing out people she recognized. She had never seen a picture of herself as a baby. She immediately asked for a piece of paper and carefully wrote out her entire name, address, and phone numbers for Jimmy, ending it with “I love you.”

Sara explained that she never really felt like she belonged with the families that she lived with and always wondered if she had a real family. When she was told that she was an ‘Auntie’, she flopped down on her bed with amazement. Sara had lots of questions about her mom and other family that she was excited to ask her brother.

Sara was allowed to decide when and where she would be united with her brother. When the caseworker’s visit was finished, Sara approached her, gave her a huge hug saying, “Thank you, thank you, thank you!” before sitting down to examine the pictures again.

“The above story is true, but the name and photo have been changed.”